​Podcasts are the great equalizer, as one Princeton woman shows
By Jeff Edelstein - The Trentonian - Sunday, Sept. 27, 2020 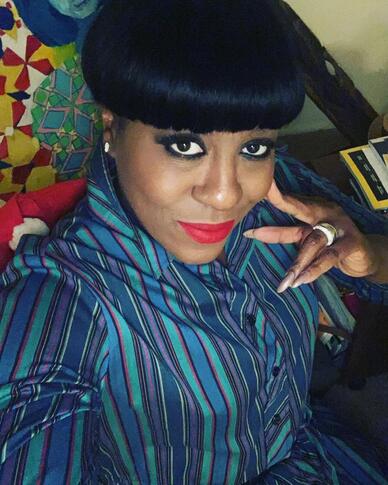 DearSis host Myrtha Jasmin aka: MJ
​As you’re well aware, I have quite the platform here at The Trentonian, and I’ve been using it for over two decades now, first as a reporter, then as an editor, and for what feels like forever, as a columnist. It’s fantastic, being able to broadcast my views on any subject I deem worthy. Like this: Boo Trump! Yay daily fantasy sports! Boo sexism! Yay women’s butts! Nevermind the last two things are kind of mutually exclusive, but not really, I’ll explain in a future column!

Anyway, having a newspaper column - or a radio show, or a TV show - used to be the only way people could successfully shoot their opinions into the world. You had to have the backing of major media, or else you had to be wealthy. Failing either of those, you could’ve grabbed a milk crate and planted it on the corner of 1st and Main and started hollering, but that usually didn’t end well.

Of course, everything has changed since I started writing for the newspaper. The Internet exploded, and with it, all of a sudden, the barrier to entry in opinion-giving was blasted away. Do you have an Internet connection? Then you too can broadcast your views into the world. If you’re good enough at it, if you connect with enough people, if you develop a following, you could become more popular than some horned-up fantasy football hippie.

So with that, please meet Myrtha Jasmin - MJ, to her friends and podcast listeners alike. A 1995 graduate of Lawrence High School, MJ started a podcast earlier this year, called DearSis, in which she talks about life, love, business, and just about anything else under the sun. Each podcast - new ones drop every Wednesday - feature MJ interviewing a guest and then it goes from there.

“DearSis was born in February 2020 and has been taking off ever since,” MJ said. “I love the podcast, it allows me to be myself. People seem to enjoy it. It’s authentic. I talk about sex, there’s controversy, everyday things. The only thing I don’t talk about is politics. I’m a very political person, but I try not to talk about politics. It upsets too many people.”

I can vouch for that.

Recording at Trenton’s New Pod City at 247 East Front Street, MJ hopes to continue to grow the podcast in coming years, reaching more and more people with her news and views.

And this, to me, is a great thing. I love how the “media” has quickly become the “people’s media.” Anyone can participate.

“I get so much out of it,” MJ said. “It’s my voice, but it’s also for the listeners to understand they have a voice too. Your voice matters. People get all discombobulated about how other people think, or feel, or how you think you’re ‘supposed’ to live your life. We’re in the world of the free. So live free.”

In short: MJ thinks you, you, and you should have a podcast.

And understand: She is not some slick media pro. Her day job? Cashier at McCaffrey’s supermarket in Princeton, where you can be sure she’s letting people know to tune in to her show. Gotta have a little hustle in this game, you know.

Jeff Edelstein is a columnist for The Trentonian. He can be reached at:
jedelstein@trentonian.com
facebook.com/jeffreyedelstein
@jeffedelstein on Twitter